Shortly before World War II the Community numbered 166 people. Some emigrated to South America and South Africa. Most stayed on the island. The Italians left them in peace and they prospered as merchants dealing in textiles, foodstuffs, haberdashery, and other such goods, as well as exporting currants and raisins to Egypt and Europe.

The Germans occupied the island on 3 October 1943 and a period of terror and barbarity began. The following summer one more atrocious event was to be added to the long list of trials. The harrowing arrest, transport and eventual extermination of the Jews of Kos at the Auschwitz concentration camp.

Twice in the month of June 1944 the German military Commander of the island, Colonel Ruf (an anti-Nazi of Austrian descent) asked the Italian chief of police Lieutenant Dante Zucchelli (an anti-facist secretly cooperating with allied intelligence, who was actually married to a Greek woman from Kos) whether there was a place on the island that could serve as a suitable holding place in the likely event of a round-up of the Jewish population. The answer he received was that “a place would be found”. It was as if Colonel Ruf was warning the island’s unsuspecting Jews about the fury that would soon be unleashed against them. Lieutenant Zucchelli wasted no time in informing Haim Menase, the president of the Jewish Community, pointing out the terrible position of the Jews and suggesting them to leave the island as soon as possible to save their lives. Zucchelli had already decided to issue the Jews with false documents showing that they were Turkish nationals in the hope of saving as many as possible.

(Turkey had not come into the war against Germany and its neutral status afforded its subjects some protection against occupation forces).

On Sunday 23 July 1944 the following telegram was sent to Kos by the German Administration of the Police and Security Forces of Greece: “The Chief of Police and Security of Greece intends to deport Jews from the island. The military authorities are expected to lend the secret police their support so as to expedite this (deportation). All Jews, irrespective of sex or age, are to be arrested and prepared for transport. Deportation will be by sea. They may take only blankets and food as space available on the means of transport is insufficient. All Jewish owned property is forfeit to the state of Italy. Looting, beating and shooting are to be avoided during arrest. Furthermore, every possible precaution should be taken to avoid harming the residents’ attitude towards us. Jews who are Turkish nationals are exempt”.

There followed a meeting in Kos Town Hall attended by the military Commander of the island Colonel Ruf and his interpreter Kolmann, the commanding officer of the 10th Battalion which was posted in the town of Kos, Major Müller and the commanding officer of the German Military Police on the part of the Germans. On the part of the Italians the meeting was attended by Delegato (civilian governor of Kos), Carlo Giannazzi, Podesta

(the town’s appointed Mayor), Luigi Pistone, and Chief of Police, Lieutenant Dante Zucchelli. During the meeting Colonel Ruf informed those present that the order to round up the Jews had arrived and told Major Müller to make the arrests and gather the

Jews in the Civic Hall. He also told Zucchelli not to hamper the arrests, and Gianazzi to provide food for the detainees until he received further orders.

The cruel Major Müller began the arrest of Jews at 3 p.m. by raiding homes, cinemas, and anywhere frequented by Jews, in or out of town. All in all 104 people were arrested and taken to the Civic Hall in a state of fear. There they were body-searched and obliged to hand over their jewellery. The islanders were only allowed to bring them food and a few blankets.

Their homes, furniture, household goods and jewellery, as well as their shops stocked with fabrics and other goods were locked up by the Germans and the doors sealed with notices on them prohibiting entrance on the penalty of death. All the Jews’ chattels passed into German and Italian hands.

Zucchelli worked all Sunday night and Monday night to make documents showing that many of the Jews were Turkish nationals so as to save them. There were already six Turkish nationals among the arrested Jews: Julietta, wife of Mois Menase, Kantie, wife of Alberto Franco, a lady named Giboul and three more whose names are not known. Zucchelli pointed out to the German policeman in charge that among those arrested there were several Turkish nationals and that this should be looked into, as Turkey was not at war with Germany.

He informed Major Müller, who ordered all Jews to be taken to the courtroom in the Civic Hall where their files would be looked into. So it was that at 9 o’clock in the morning on Tuesday 25th July the Chief of the German Police arrived in the courtroom and began reading the list of the Jewish names. First he read the names of the six who were genuine Turkish nationals. But when he reached the names of the others that Zucchelli had included in the list, intending to supply them with false passports, there were panic-stricken cries from some young girls who protested, “All or none!” The German lost his temper and stalked out of the room saying, “Enough! The six are free to go. The rest stay here”. The German major had already decided the fate of the Jews of Kos. He would let the six go but the other 98 were to be taken to Auschwitz.

So in the afternoon of Tuesday 25 July the Jews walked from the Civic Hall to the harbour, escorted by a military guard. The frightened islanders watched their slow, reluctant progress from a distance, unable to help. The Jews were piled onto a cargo ship bound for Samos, where there were more ships full of Jews from Rhodes. They were all sent to Piraeus together, and from there they were taken by rail to the gas chambers of Auschwitz. It should be pointed out that the mass dispatch of Jews from Rhodes and Kos was one of the last to that place of martyrdom. The German commanding officer Colonel Ruf left Kos a month later. He was replaced by Major Heinemeier, who handed the island over to the Holy Company and the British allies on 8 March 1945. 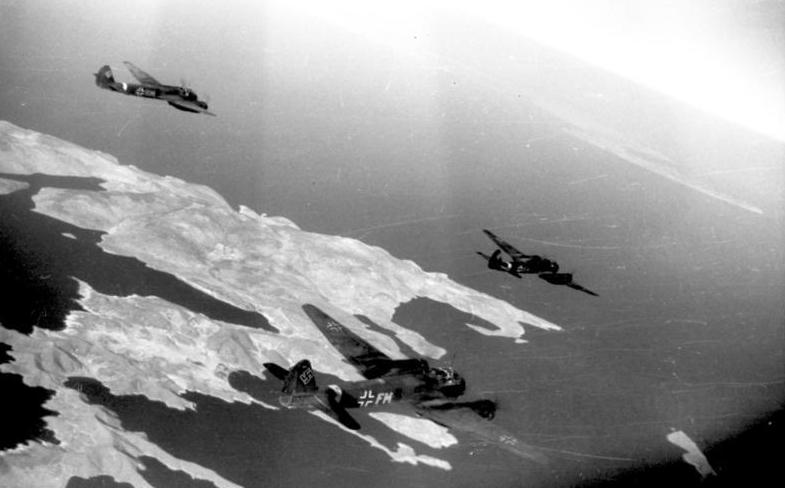 German fast bomber aircraft (Junkers Ju 88)
fly past the island of Astypalaia, towards the island of Kos.
Credit: Wikimedia Commons provided by the German Federal Archive