From September 1943 until July 1944, while the Germans were arresting and displacing Jews all over Greece, no measures were taken against the Jews living in Rhodes. This eased their initial fears and gave to the members of the Jewish Community the false impression of peace and hope that nothing serious was going to occur. Only a few young Jews, risking their lives, dared to escape in shaky boats to the Turkish coasts. The rest waited and hoped.

In the meantime, the Nazis were preparing their criminal plan for the displacement and the elimination of the Jews. In mid-July 1944, the German Command ordered the Jews to reside solely within the confines of the city of Rhodes or in the villages of Trianta, Kremasti and Villanova (now known as Paradisi). These were the places were they had fled in order to escape the bombardments, in a distance no more than twelve kilometers from the city.

A few days later, on 18 July 1944, a German officer turned up at the house of the president of the Jewish Community and told him that, according to the orders of the German Commander, all Jewish men over 16 had to appear the following morning in the old headquarters of the Italian Air Force. They had to bring with them their identity cards and their work permits. This trick made everyone believe that they would be gathered in order to be sent to forced labour.

In the next morning, two SS officers, who were sent from the “Rosenberg Command” in Athens, walked into the room accompanied by an interpreter. With brutality and threatening, they grabbed the documents from the hands of the Jews gathered in the room. They assigned the president of the Community the task to inform the women to join their husbands within 24 hours, otherwise they would be shot. They also had to carry with them all their belongings: jewelry, gold sovereigns, banknotes, a few personal items and food.

In the confusion that ensued, and in their ignorance, the women could do nothing but to obey the order. On 20 July, almost all the Jews of Rhodes had been captured and were held in this improvised concentration camp. The Germans started, with immense brutality, taking everything valuable from them. In the meantime, the Germans were plundering the houses of the Jews that had been hastily deserted. The Italian High Command was forced to issue an order according to which all Jewish real estate and assets were confiscated in favour of the Italian State.

At this point one should mention the humanitarian stance shown by the Turkish consul, Selahettin Ulkumen, who intervened to save not only Turkish nationals but whole families as well, even at the remotest proof of their Turkish citizenship. He managed to save from the Nazis approximately 40 Jews who would have otherwise been led to death. For his acts, he was awarded after the War the title of “Righteous among the Nations” by Yad Vashem.

The order for the departure came at noon of Sunday 23 July. An endless queue of Jews set off. They were more than 1,600 men, women, children and elderly. Some were dragging their sad belongings, others were carrying them on their backs. Some were not walking fast enough. The guards, who were following the file accompanied by wild Alsatians, were beating them with their rifle stocks. Heads down, they passed through the city. The streets were empty as the Germans had sounded the alarm for air attacks. Once they arrived at the port, they were thrown in three very old cargo vessels. The presence of Jews on the island, which dated many centuries back, ended on that sad day of the summer of 1944.

The course from Rhodes to the port of Piraeus was horrible. It was terribly hot and the vessels were so full that those in the cargo hauls could not go up even to get some air. Seven persons died in the course of the voyage and their bodies were thrown in the sea.

They arrived at the port of Piraeus on 31 July 1944 and were immediately taken to Haidari, where they were ruthlessly humiliated. The Red Cross was not allowed to give them food and water until 36 hours after their arrival. The women were separated from the men. They were stripped in the most barbaric way to make sure that they had no more jewelry on them.

The Germans in an apparent attempt to break their morale were beating men, women and children sometimes to death. During the three days of their stay in the Haidari camp, another ten of the Jews of Rhodes died.

On 3 August, after having extracted their gold teeth and glasses, the Germans led the Jews in animal wagons. They put 65 persons in each wagon and sealed the doors. That was the last “consignment” of Jews from Greece. The trip to Poland lasted 13 days. About 100 people died during the trip and their bodies were thrown in the fields along the rail lines. They arrived in Auschwitz on 16 August and, after the horrible “selection” procedure, 1,200 persons, those who were judged too weak to work, were immediately sent to the gas chambers and the crematoria. The remainder was sent to forced labour in quarries, in coal mines and in the railways. The women were raped, sterilized and used in inhuman experiments, with no mercy.

Despite their short stay in the camp, most died of hardships, weakness and diseases. Only 150 survived: 120 women and 30 men. It is worth mentioning though that even after their liberation by the Allied forces, many of them died of exhaustion as they had become living skeletons. 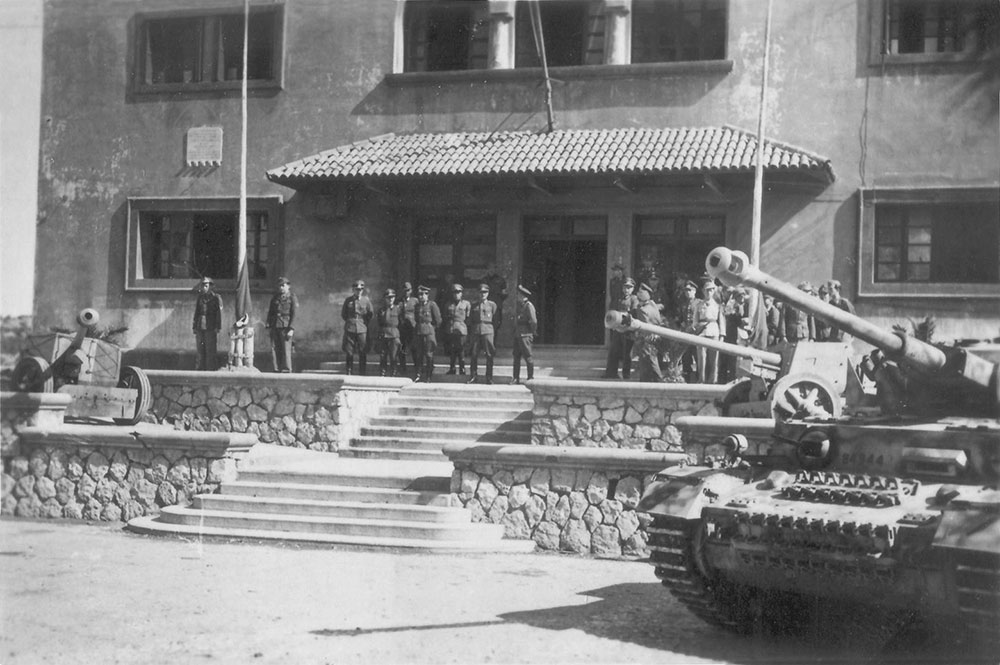 From “One Hundred Years Photography by Simeon Dontas” Photographs from the landing of the Germans troops on Rhodos, publish in August 1943 in the periodical "Die Wermacht"