Bulema, Fritada, Boyos, Travados, are words that bring to life the spirit of the Spanish Jewish heritage that is disappearing.

The Serphardi cuisine reflects the cuisine and tradition of the Spanish Jews until their expulsion from Spain in 1492. The Castilian refugees established themselves initially in North Africa, Greece, Turkey and Palestine.

Whilst intrinsically keeping their inherent Spanish heritage the fabric of the Sephardi culinary tradition was enriched by the influences of the new countries they settled in. Though these dishes have evolved they are basically unchanged for centuries. To the present day they maintained their colloquial language Ladino that contains a medieval base and numerous Hebrew words.

Indeed the Spanish of Castille, Ladino and the Sephardi cuisine are the sole living relics of the lost fatherland. The preparation of traditional dishes handed over from mother to daughter, have been weaving the same pattern of color and flavor of fifteen century Spain.

Basically a peasant cuisine, it relies on the simple excellence of the natural produce and basic ingredients and on the ingenuity and patient skill required in creating interesting dishes. The obligations of hospitality are second nature to the Sephardim. No effort is spared. Hours will be spent stuffing vegetables, folding pastry around fillings, and preparing sweetmeats perfumed with orange flower essence.

It is deemed a great honor when the quest compliments the hostess with words “Manus Bendichas”, May your hands be blessed.

In a changing world, this great heritage, time consuming and laborious, but delightfully exciting and an integral part of the Sephardi past, is to be cherished and perpetuated. 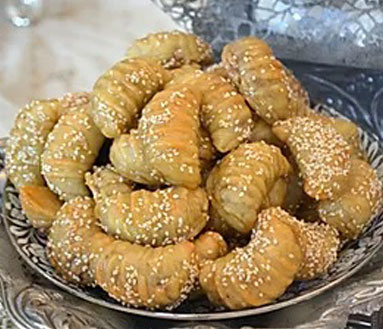