The Kahal Shalom is the oldest Jewish synagogue in Greece, and the sole remaining synagogue on the Island of Rhodes used for services. There were once six synagogues and prayer halls in the Jewish Quarter (called “La Juderia”). The Kahal Shalom is located on Dossiadou and Simiou Streets and is believed to have been built in the year 1577. The full name of the building is “Kahal Kadosh Shalom” (Holy Congregation of Peace). It is used for prayer services when visitors or former residents and their families visit the Island for Friday night prayer services, High Holiday services and for special occasions.

The Jewish community of Rhodes has an historical background dating back to ancient times. During the past five hundred years, the background of the Jews of Rhodes was influenced principally by the Jews who fled Spain at the time of the Spanish Inquisition. Large numbers of Sephardim traveled across the Mediterranean Sea to the Island of Rhodes, as well as other cities such as Salonica, Istanbul and Izmir. The descendants of the Jewish people from Spain are known as Sephardic Jews, because the Hebrew word for Spain is Sepharad. Since the large migration of Jewish refugees from the Spanish Inquisition, the Jewish community on the Island of Rhodes spoke the Ladino language (also called Judeo-Spanish) which is similar to modern day Spanish. During its height in the 1930s, the Jewish community had a population of approximately 4,000 people.

The interior of the Kahal Shalom synagogue follows the traditional Sephardic style of having the “tevah” (the prayer reading table) in the center of the sanctuary facing southeast toward Jerusalem. The floor is decorated with graceful black and white mosaic stone patterns, which is a distinctive design motif used throughout the Old City of Rhodes.

During the 1930’s, a balcony was built in the Kahal Shalom sanctuary for seating of the women. Prior to that time the women sat in rooms adjoining the south wall of the synagogue. The women’s prayer rooms (known in Ladino as “la azara”) viewed the sanctuary through windowed openings adorned by latticework.

In the courtyard on the east side of the synagogue, there is a plaque above where a water fountain once existed, and it bears an inscription dated the month of Kislev, 5338 (1577). Apparently, this fountain was constructed at the same time as the synagogue. On the west side of the synagogue there was a religious school (“yeshiva”), however it was destroyed during World War II.An intriguing feature of the Kahal Shalom sanctuary is that it is decorated with numerous religious wall paintings.

The other five Synagogues 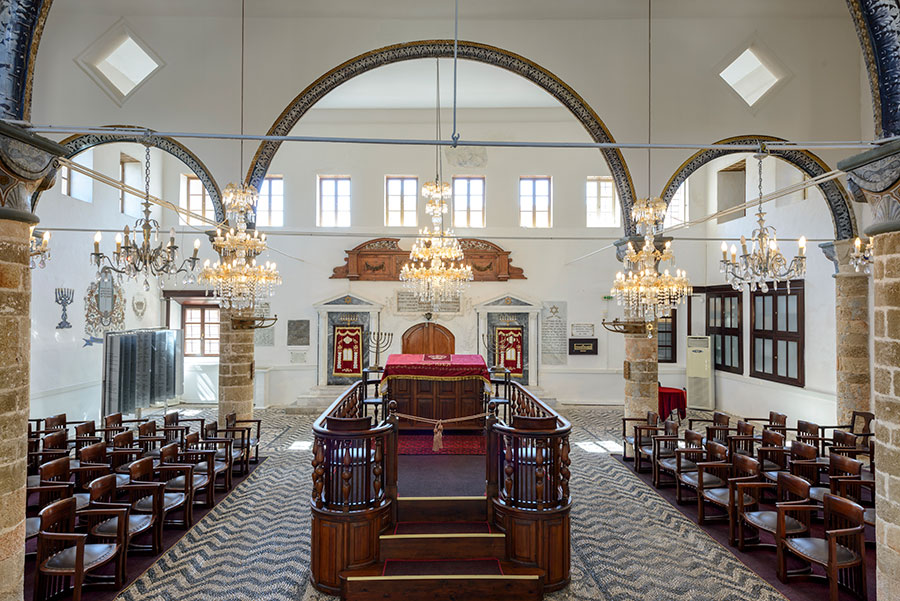 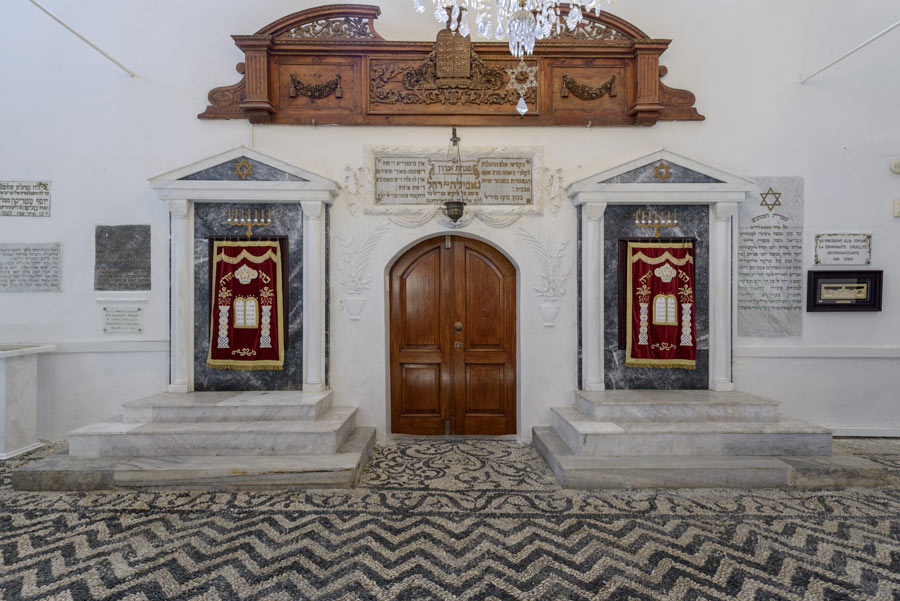